If these coloured waste bins were to be found in an art museum I would not be able to tell whether they are exhibits (“readymades”) or just "real" waste bins.

What is a work of art?
What is the role of art?
Does art have to be "beautiful" or "meaningful"?
Who gets to decide?

Us and our shadows

No you'll never get rid of me

(The words for this blog post were borrowed from the lyrics of the song "me and my shadow" by Al Jolson, Billy Rose, and Dave Dreyer)

Now that summer is almost over, with temperatures dropping fast and the sun increasingly refusing to show its beautiful face to those living in Vienna, I find some consolation in looking at pictures that Nina and I took in early August - on the very first day of our two weeks vacation in Greece during a one day stop over in Mykonos town, on our way to Naxos. 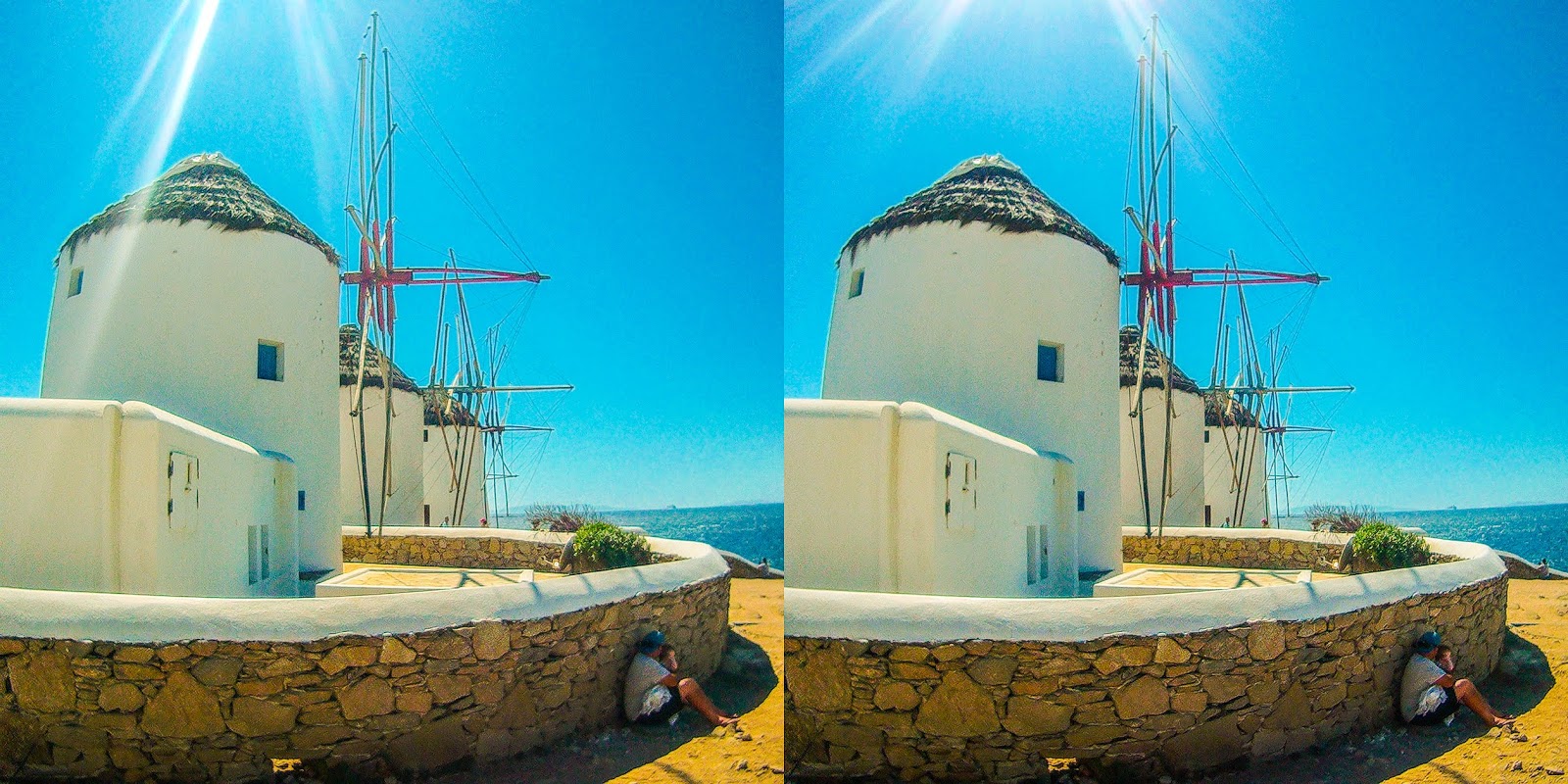 As many times before, I initially had no intention whatsoever of taking any photographs during the vacation. Why on earth would I take a picture of a motif that everybody has already seen more than a dozen times anyways and of which high quality images can easily be found on the world wide web? If at my holiday destination I stumbled upon something that made me wish I had my camera, I could always use my smart phone. 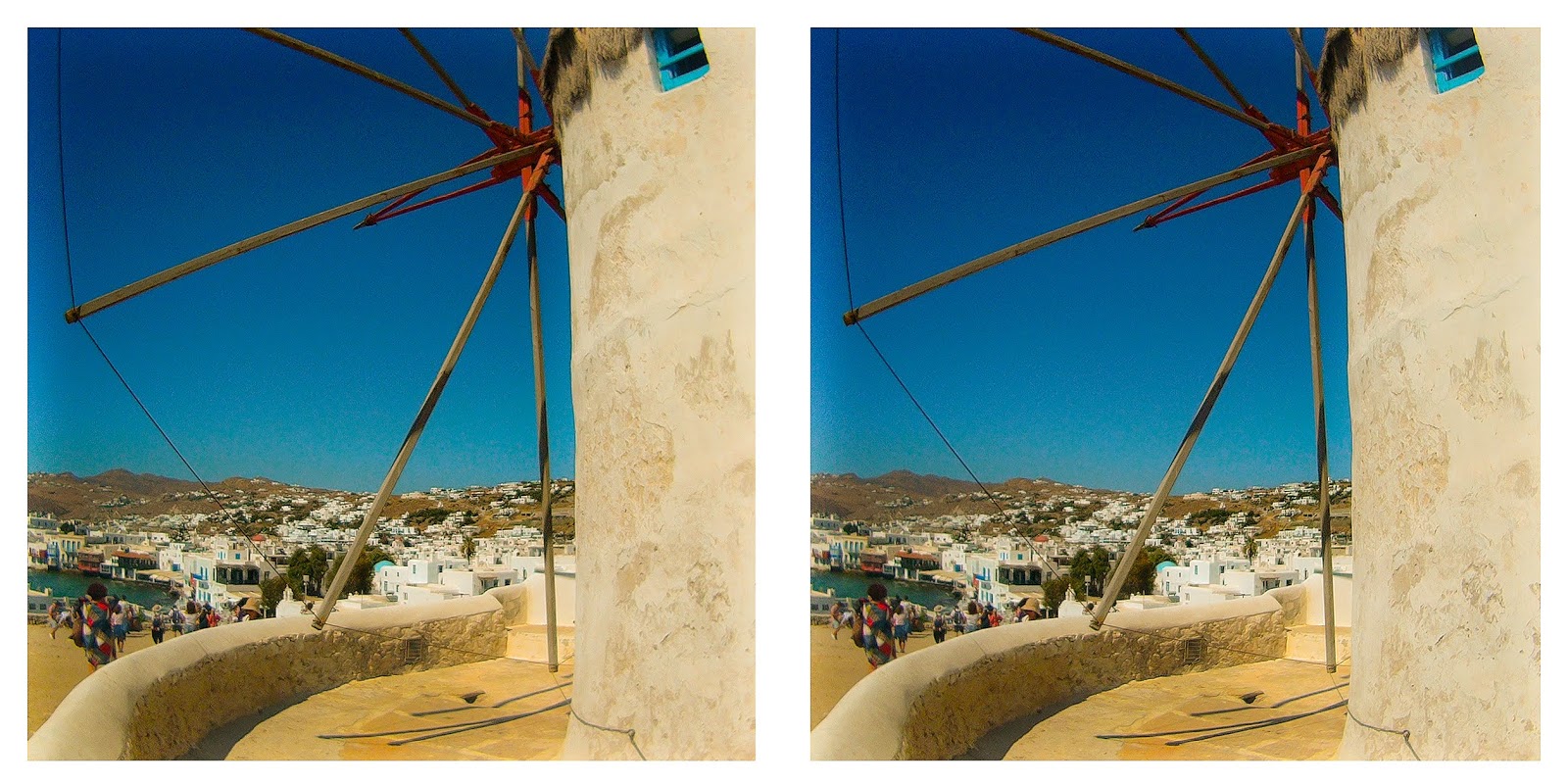 And then out of the blue, just about two weeks before the start of our vacation, I realised I could try something that seemed really unusual to me: stereoscopy, a.k.a. 3D photography. 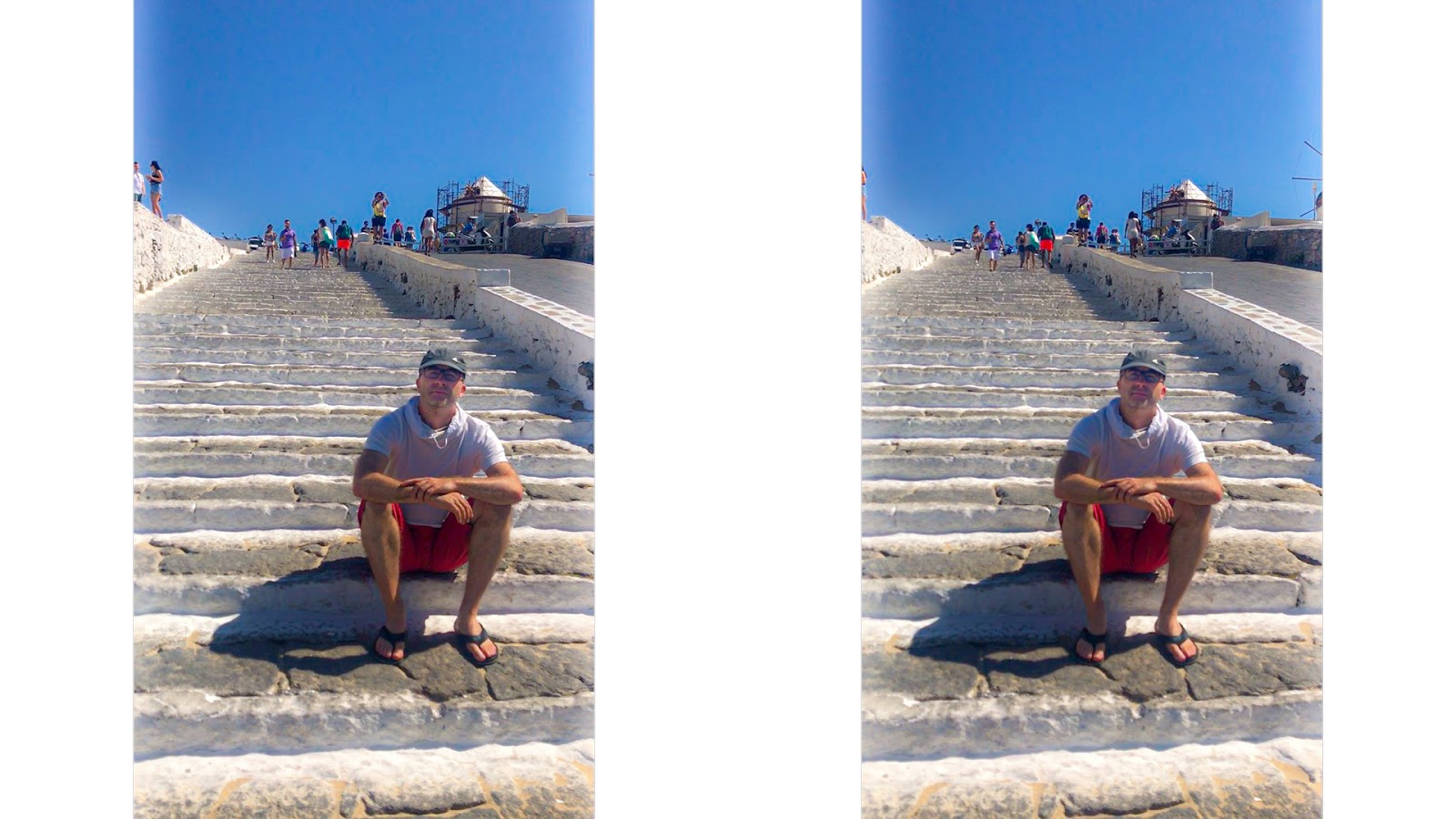 Immediately after this "revelation", I downloaded an app that enabled me to take 3D photographs with my smart phone and started experimenting right away. 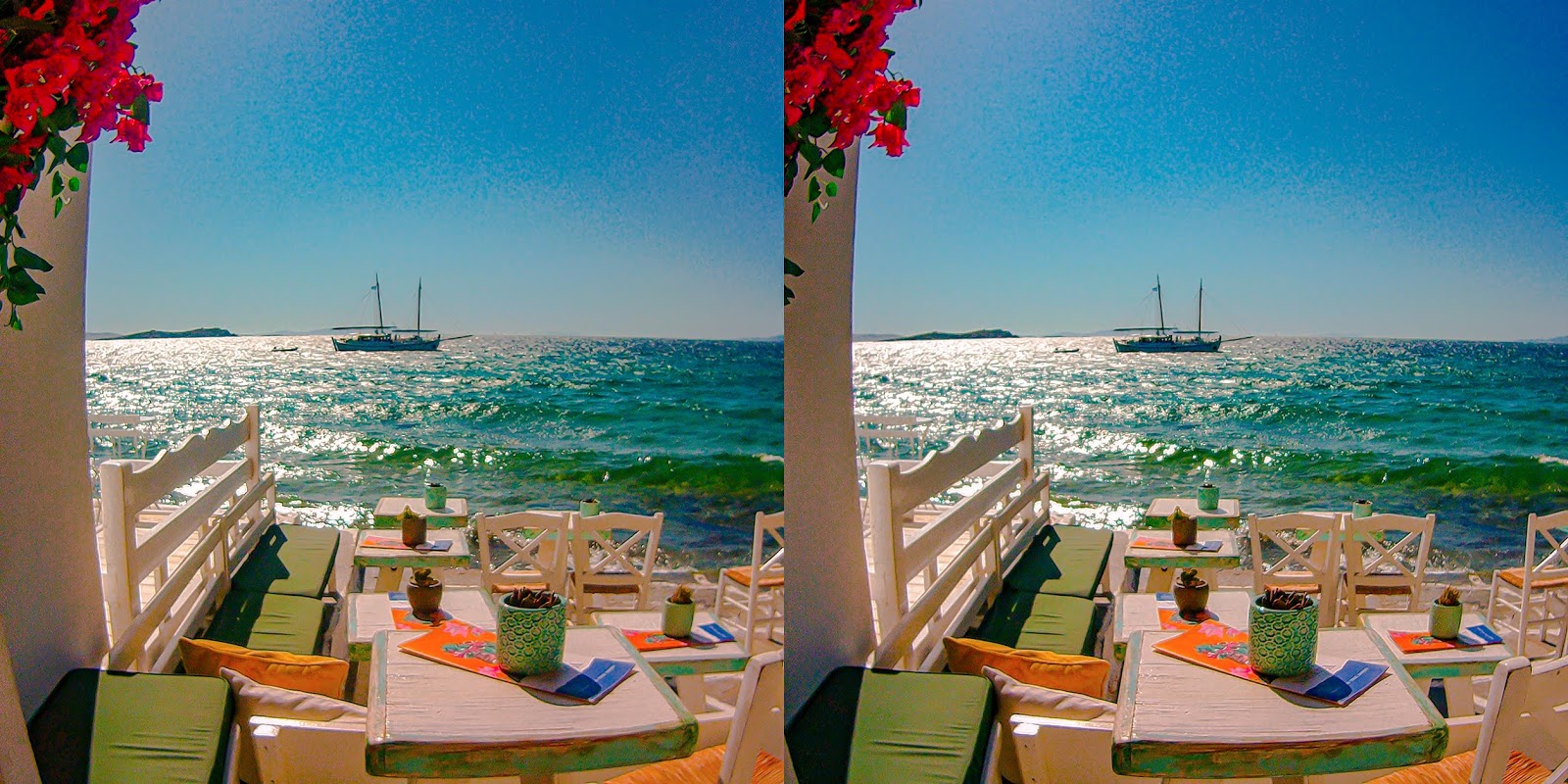 Already the very first results were so evocative that the same evening I bought a SID 3D camera which was delivered a few days later, just in time for our vacation. 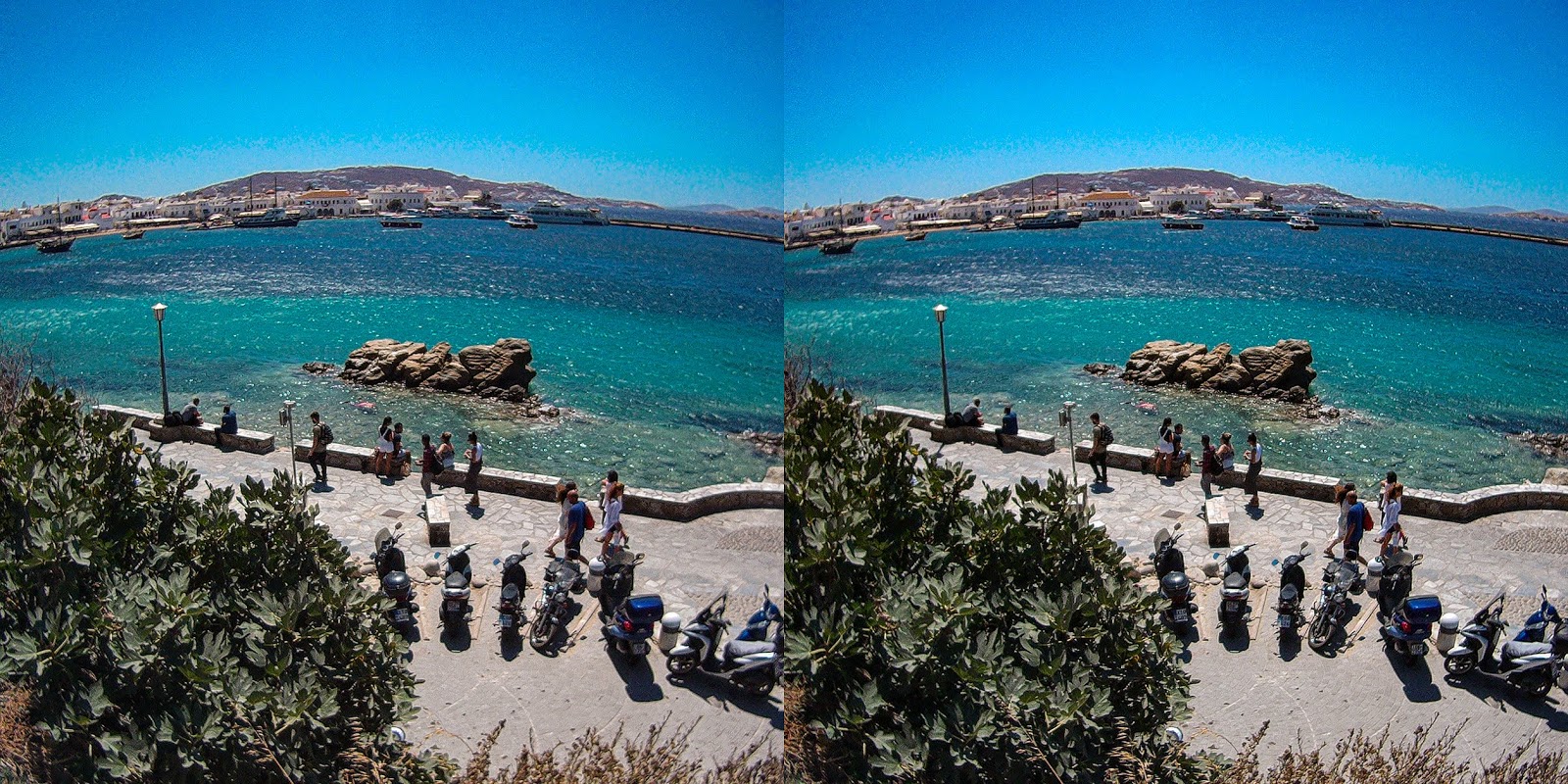 Well, the 3D idea did not really come "out of the blue" considering that for the last weeks I had been spending many evenings looking with fascination at 3D images of the band QUEEN in a book which Nina had got me as a birthday present. 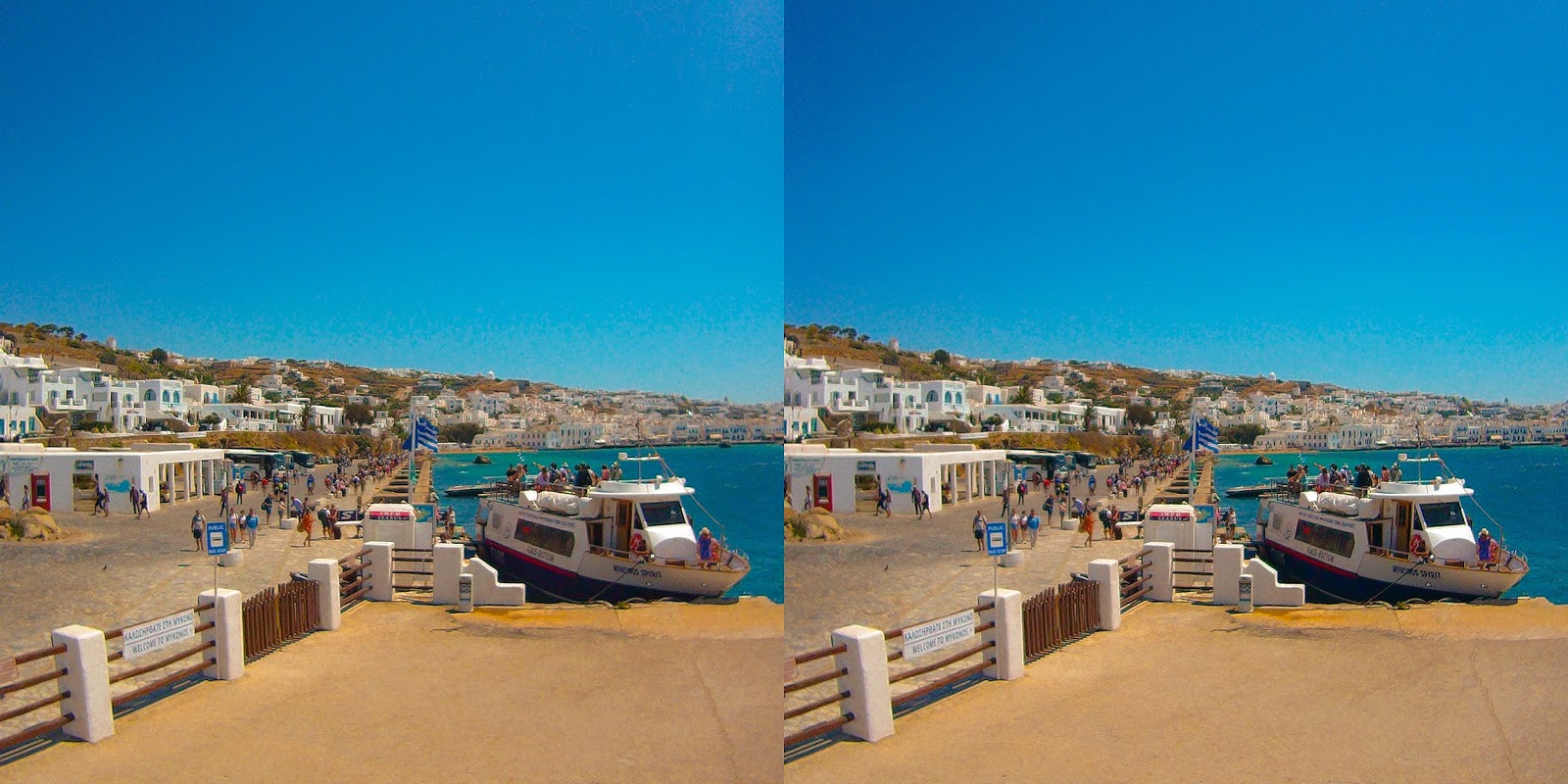 The pictures in the book were taken by nobody else than Brian May himself, the band' s guitarist who's been an avid stereo photographer since early childhood. Subsequently, the 3D pictures he took of flamboyant front man Freddie Mercury range from the band's early days in 1970 right up to the legendary concerts in London's Wembley Stadium in 1986. 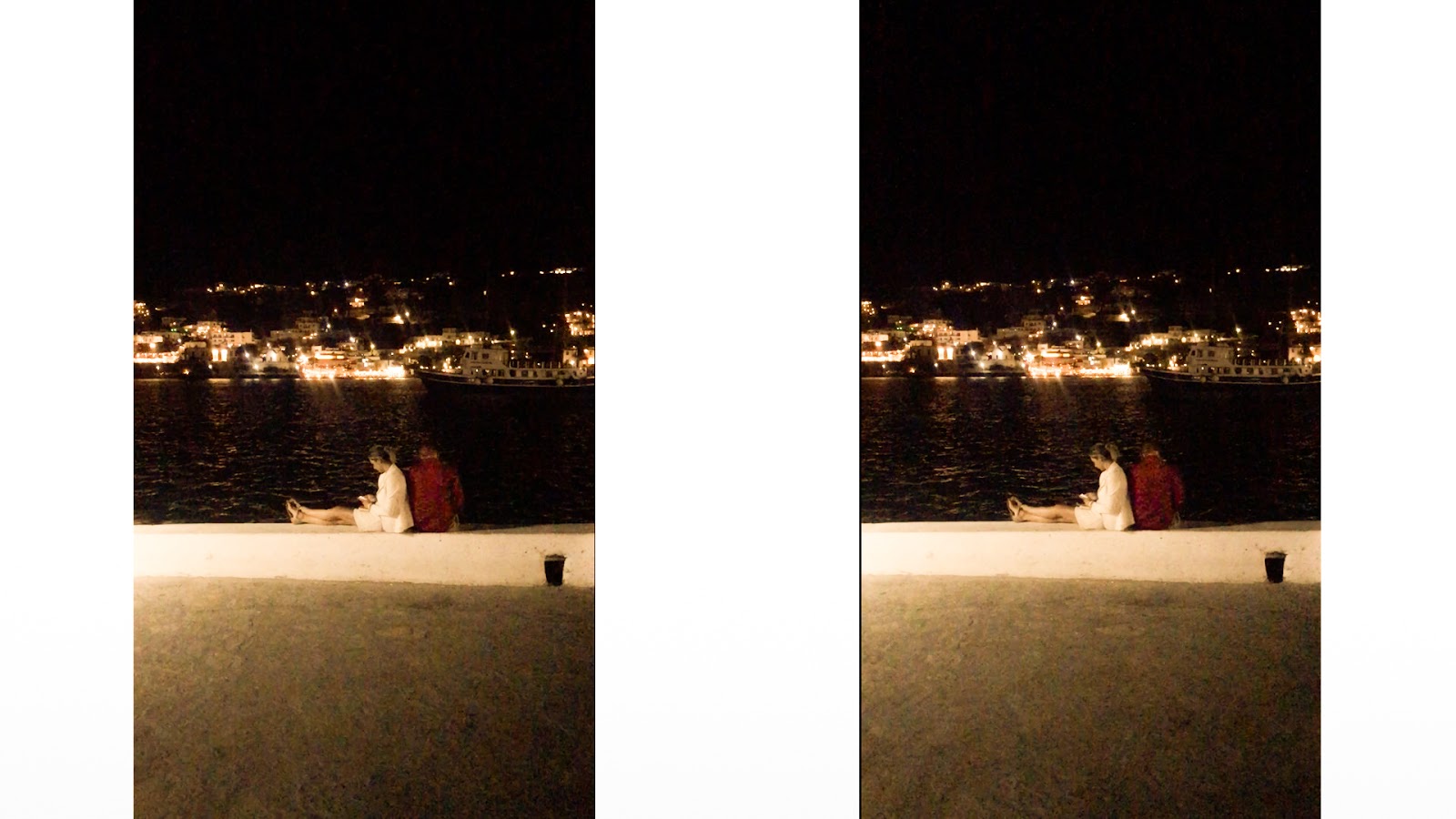 Nina and I spent the handful of hours that we had in Mykonos town walking around randomly and absorbing the vibe.

We visited the iconic windmills and the old port, drank cocktails as well as beer next by the sea and briefly checked out the night life. By capturing those moments with my smart phone app and the SID 3D camera, Nina and I gained first experiences in the art of stereographic photography. 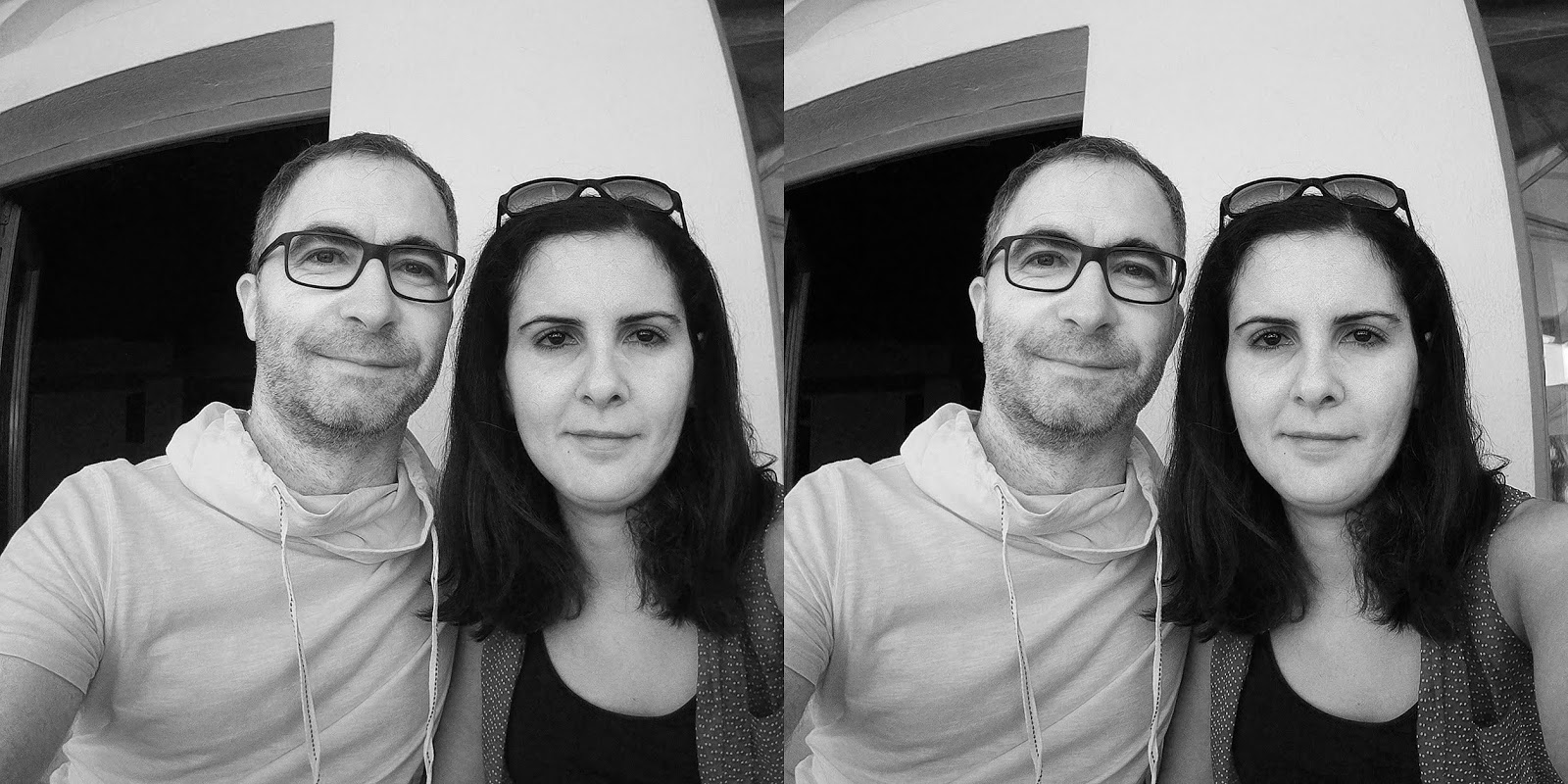 I have a strong feeling that this is just the beginning of an exciting photographic journey. Thanks to you, Mr. Brian May!

The "Portara" (or the "Great Door") is the most famous landmark of Greece's Naxos island. 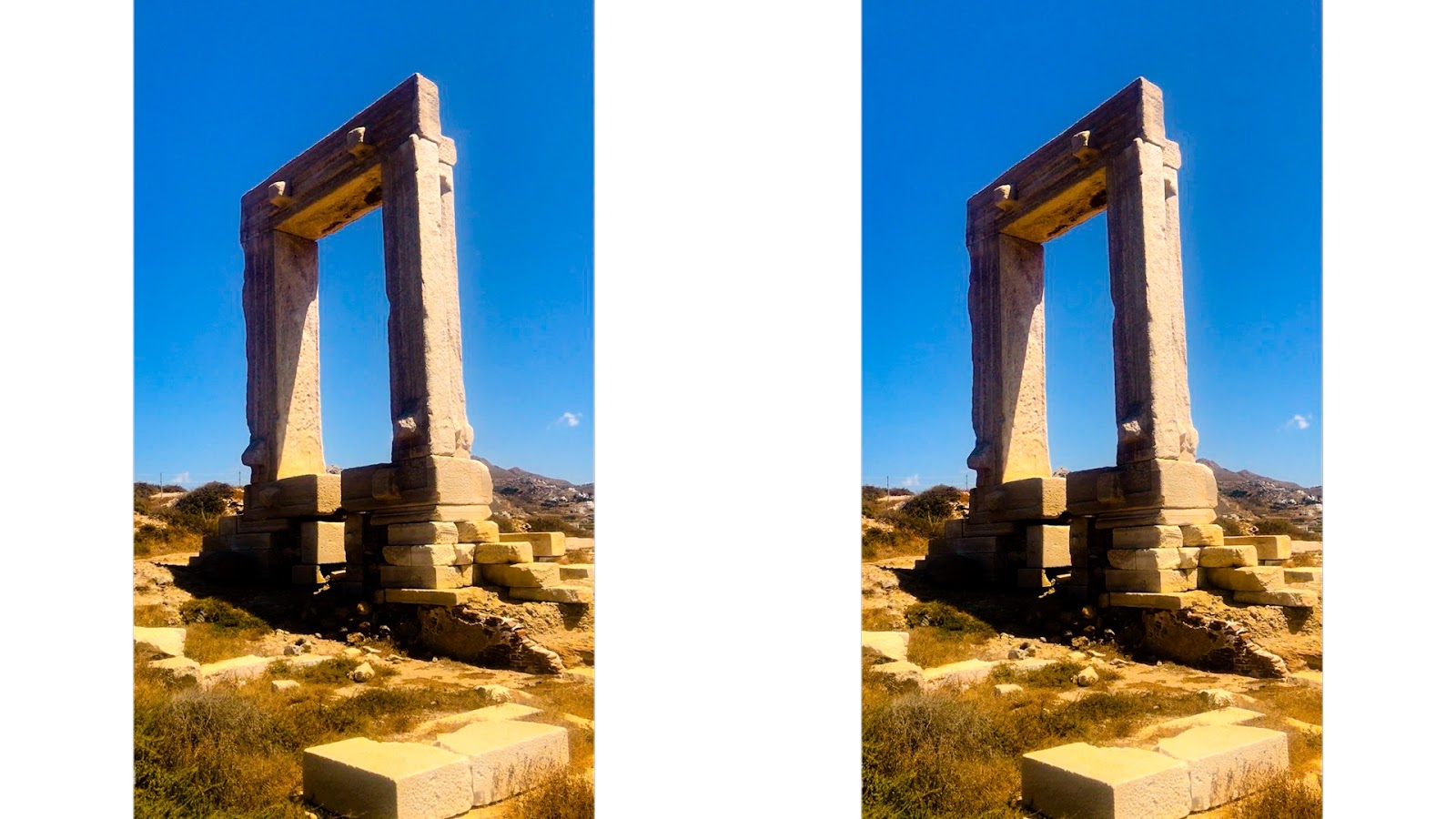 The huge marble gate is the entrance to an unfinished temple. The rectangular gate is around 6 m high and 3.5 m wide. It is made of four blocks of marble, each weighing 20 tons. 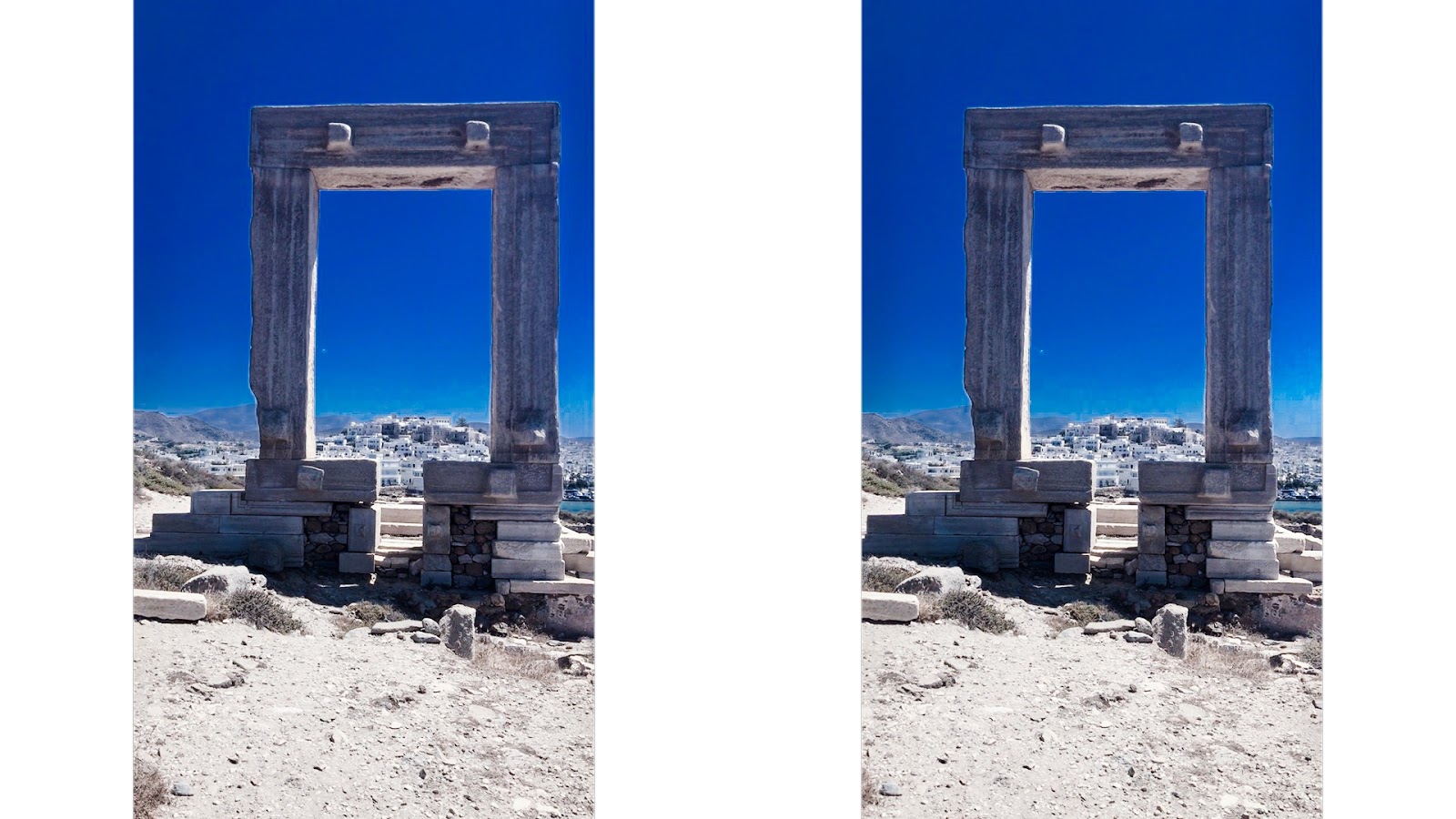 The temple was begun about 530 BC by the tyrant Lygdamis, who said he would make Naxos's buildings the highest and most magnificent in Greece. 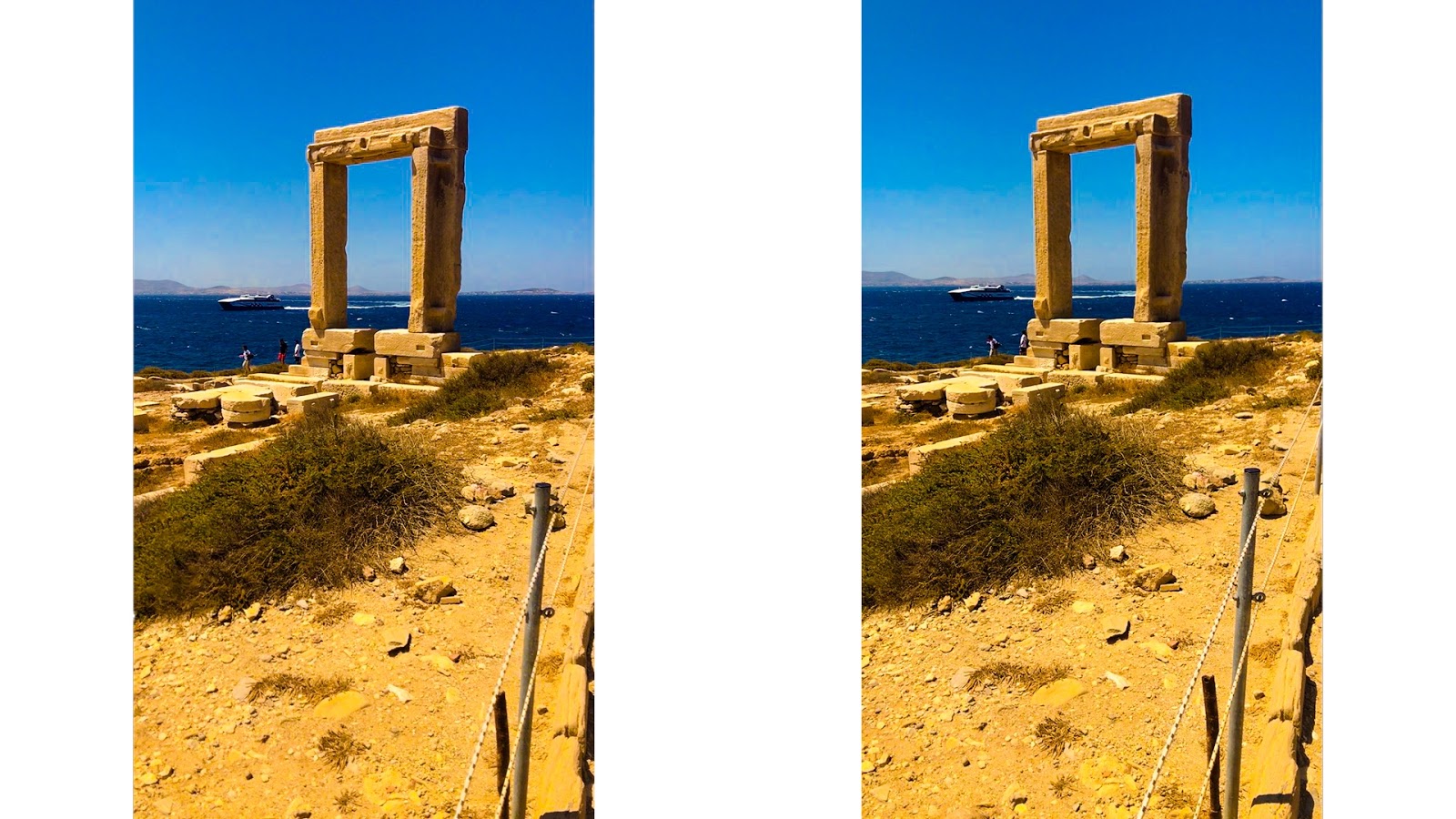 Lygdamis was overthrown in 506 BC and the temple never completed. 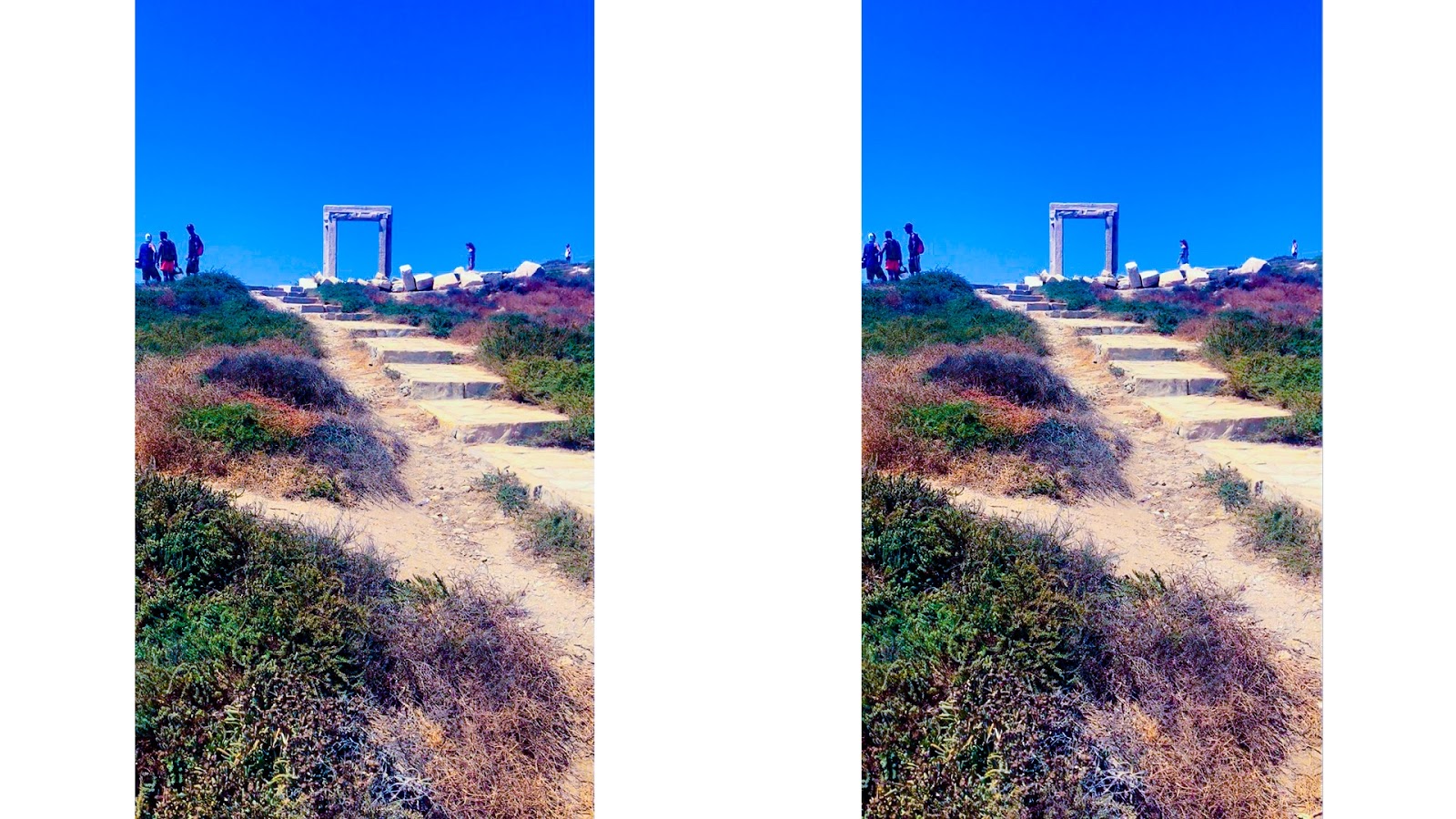 The "Portara" is connected to Naxos Town ("Chora") by a paved footpath.


If you would like to know more about this impressive landmark I can warmly recommend my sources: Sacred Destinations, Greeka and the website of Naxos.